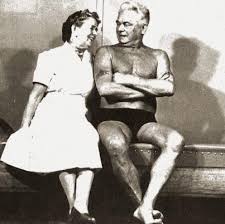 “Born near Dusseldorf, Germany in 1880, Joseph Pilates suffered from asthma, rickets and rheumatic fever as a child. His determination and drive to overcome those ailments led to the study of both Eastern and Western forms of exercise; including yoga, zen, and ancient Grecian and Roman regimens. By the time he was fourteen, he had worked so hard at body building that he was able to pose for anatomical charts, and had become a diver, skier and gymnast.
Later, in 1912, he decided to go to England and become a boxer. While there, World War I broke out and he, along with other German nationals, was interned for a year in Lancaster. While in the camp, he taught his fellow internees his physical fitness program and boasted that they would emerge stronger than they were before imprisonment. In addition, none of his followers succumbed to the influenza epidemic that swept the nation and killed thousands of people. Also, while there, he encountered people who were disabled as a result of wartime diseases and incarceration. He began devising machines to help in their rehabilitation. These machines were the prototypes of the equipment we all use today.
After the war he returned to Germany to continue his work. He began training the Hamburg city police. It was during this time that he met Rudolf von Laban. Laban incorporated some of Joe’s body building methods into his own teaching. From Laban, the exercise inevitably passed on to Mary Wigman and Hanya Holm. And, today, they are still part of the warm-up in the Holm technique.
In 1925 Joe’s teaching suddenly became important to the German government. When he was invited to train the New German Army, he decided that it was time to leave for America.
Joseph Pilates-the name is of Greek origin-brought his revolutionary method of physical and mental conditioning to the United States when he and his wife, Clara, a nurse, immigrated in 1926. Their studio in New York City caught the attention of the dance community-and the Pilates technique became an integral part of dance training. Such legends of dance as Ruth St. Denis, Ted Shawn, Martha Grahm, George Balanchine, Hanya Holm and Jerome Robbins have all practiced Pilates and taught it to their students. Pilates felt that his work was probably fifty years ahead of its time.
Joe’s definition of pyhsical fitness: “The attainment and maintenance of a uniformly developed body with a sound mind fully capable of naturally, easily and satisfactorily performing our many and varied daily tasks with spontaneous zest and pleasure” is as sound today as when he wrote it in 1945.”

Published by the Institute for the Pilates Method – Fall 1991